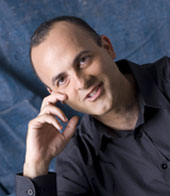 Alon Hilu is an Israeli writer and playwright. His new book, The House of Rajani, was published in 2008 and won Israel’s top literary award, the Sapir Prize, in 2009. A historical novel set in 1895 Jaffa, it describes the fascinating relations between Jewish and Palestinian characters locked in a struggle for land and power.

In 2004, Alon Hilu published his first book, Death of the Monk, a historical novel which re-tells the story of the blood libel against the Damascus Jews which took place in 1840. The book was translated into five languages, was among the five finalists for the prestigious Sapir prize in 2005, and won the Israeli Presidential prize for a debut novel in 2006 and the Israeli Prime Minister prize in 2008.

Alon Hilu was born in Jaffa in 1972, the son of Damascus-born parents. He began writing at the age of 16, creating radio plays for Kol Yisrael’s “Reshet Aleph” radio station (edited by Miri Sharf), including a series of radio plays called Key Position about the adventures of a child who comes home to an empty apartment every afternoon.

In the early 90’s, he published two short stories: The Biblical Zoo in Jerusalem, describing an ultra-orthodox woman who tries to break into the cage of a lion in the zoo and have sexual intercourse with him (1992, “Iton 77”), and Last Seen, describing a combat soldier who unintentionally joins a search party looking for himself (1993, “Moznaim”).

Alon Hilu holds a LLB Degree in Law and a BA degree in the Art of Theater from Tel Aviv University where he studied Dramatic Writing under Israel’s leading playwrights Yehoshua Sobol and Shmuel Hasphari.

During his studies, Hilu wrote two plays which were staged in Theater festivals: A Wedding Tonight, a black comedy about the agitation of a woman who finds out that a terrorist attack took place next to her husband’s workplace. The play was staged in the 1998 “Short Theater Festival”, directed by Ilan Toren, and acted out by Ofra Weingarten and Dori Tepper. The second play, The Day of the Dogs, an absurd-style play about a young couple suffering from daily abuse by their neighbor’s dogs, was staged in the 1999 Acre festival, directed by Gili Bar-Hillel. Both plays, translated into English by Gili Bar-Hillel, were also staged in 1997 in The Harvard Radcliffe Dramatic Club, Harvard.

Alon Hilu’s articles include, among others, an essay on “Only Yesterday” by Shai Agnon, containing a post-colonialist reading and subversive interpretation, according to which Balak, the dog in the book, subconsciously represents the Palestinian narrative. The essay was published in “Ho!” journal in 2006 under the name A Story of a Shahid Dog.